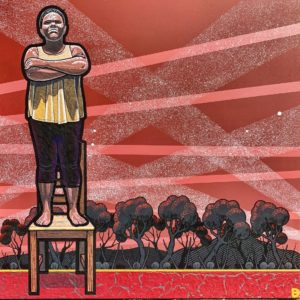 Celebrated and prolific indigenous artist, Blak Douglas, has won the 2019 Kilgour Art Prize in Newcastle with his powerful portrait of actress Ursula Yovich.  Blak Douglas (real name Adam Hill) has entered many art competitions often reaching the finals.  Adam’s work has been selected as a finalist in the prestigious Archibald Prize three times, including this year, however The 2019 Kilgour Prize is his first major art prize.

“This portrait captures the personality of Yovich, a personal friend, as well as a message.  The metaphors for Ursula standing on the chair are quite layered.  In essence, it’s that today the most disenfranchised person in this country is the Aboriginal female” Adam commented.

Trained in illustration and photography, and raised observing a family of artisans, Adam became a self-practiced artist painting in a style which is influenced by the study of graphic design, his indigenous background as well as his overtly political commentary on social justice.  Blak Douglas is also a classically trained digeridoo player and entertainer.

Adam Douglas Hill was born in Blacktown in 1970 to an Aboriginal father and Caucasian mother.  His style of painting is a modern POP art take on traditional dot painting however his signature style of dark outlines coupled with vivid colours, cracked sunsets, diagonal lines and political commentary culminates with his works standing out amongst the rest.

Newcastle Art Gallery director Lauretta Morton said the portrait was a unanimous favourite between her and the other judges – “We just found it a beautiful composition. Often you’ll have figurative works and in a lot of them (the figures) are in the centre.  What we really loved about this was it was off to the left but it is still so powerful.  You can see the relationship and respect from the painter to the subject.”

Blak Douglas is a Sydney-based artist who paints with Australian made PERMAPLASTIK scenic paints.  These highly pigmented polymer acrylic paints deliver vivid colours including intense aquamarine blues, brilliant ochres and vivid yellows and reds representative of his signature style. For further information on the PERMAPLASTIK range and the colours available visit this link.